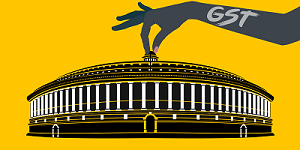 As the Budget session of Parliament resumed today, Prime Minister Narendra Modi hoped there will be a breakthrough on the Goods and Services Tax (GST) bill and that issues will be discussed in a democratic manner.
“We hope that there will be a breakthrough on the GST because all states have positively cooperated. All political parties have also extended cooperation in a positive way,” he told reporters outside Parliament. How to apply for GST registration
The second leg of the Budget session resumed today after about a month-long recess.
“We are meeting after a break and the budget proposals will be discussed in details,” he said.
Hoping for a healthy debate in the House, the Prime Minister said, “I believe that the level of discussion will go to a higher level. Attention will be drawn towards the issues related to the poor people.” New GST registration
“We are moving ahead with the consent of all through a democratic process,” he said, hoping that GST process will be completed before the session concludes next month.
GST, billed as the biggest-ever tax reform in the country, is expected to add at least one percentage points to its GDP growth.