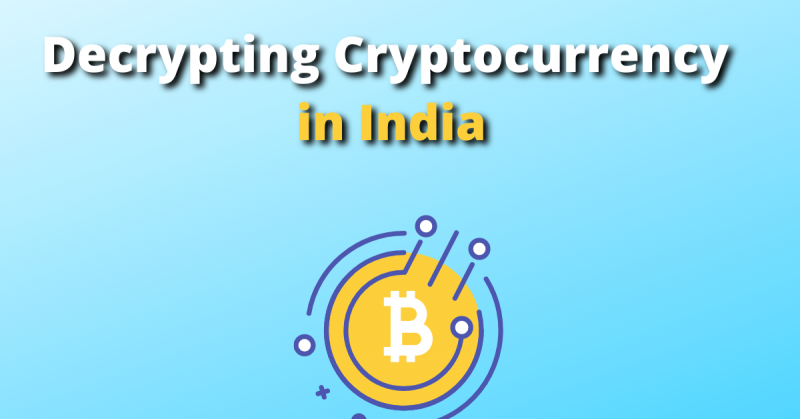 Cryptocurrency is one of the most highlighted ingenuity of the decade. Various countries deal with cryptocurrencies differently, e.g. in the USA, Bitcoin is treated as an asset. At the same time, Singapore recognizes Bitcoin as a valid currency, and Japan treats it as a commodity.

Cryptocurrency can be referred as a currency stored in coded files i.e, digital money. Cryptocurrency uses something called cryptography to secure its transactions. Cryptography, to put it in simple words is a method of converting comprehensible data into complicated codes which are tough to crack.

Bitcoin was the first ever cryptocurrency created in the year 2009. Subsequently, there has been a rapid increase in the number of cryptocurrencies that have been created some of which are Litecoin, Ethereum, Zcash, Dash, Ripple etc. In this article, we would discuss all about bitcoins in particular.

Bitcoins, in India, have slowly started gaining popularity, given the efforts of the government to move towards a cashless economy. However, it is pertinent to note that bitcoins, as of today, are not centrally administered or regulated by any specific body like the RBI which administers physical currency in India. In fact, peer-to-peer transactions with bitcoins are managed using something known as the blockchain technology which serves as a public ledger for all transactions.

Are they legal in India?
Well, RBI did impose a ban on banks from facilitating cryptocurrency transactions in 2018. However, after two years, in March 2020, the Supreme court ruled against the RBI ban. It stated that there were no clear grounds for imposing such a ban.

How is Bitcoin Generated?
Bitcoins can be obtained either by:

What are the Tax Implications?
The concept of bitcoins being quite new to the Indian market, apparently the government has not yet brought taxability of bitcoins into the statute books. At the same time, levy of tax on bitcoins cannot be ruled out. Ideally, since income from whatever source derived is included in the Income Tax Act, 1961, and supply of any service (if not specifically exempted), should be taxable under Goods and Services Tax (GST), the gains from cryptocurrency (crypto) trading and services by crypto exchanges should be liable to tax. However, there is lack of clarity on the part of government and is yet to implement the laws regulating such transactions.

Applicability of Indirect Tax (GST)
Recently, the Central Economic Intelligence Bureau (CEIB) proposed to impose 18% GST on Bitcoin transactions. It suggested that Bitcoin be categorized as an ‘intangible asset’ by which GST could be imposed on all transactions. However, the GST council is yet to implement the proposals put forth. They are:

However, in order to bring bitcoins within the ambit of GST, the definition of the terms “goods or services” must be amended. Further, treatment for bitcoins would be ideal if the government were to legalize the trading of these virtual currencies and charge GST on margins that bitcoin exchanges charge their users. This will safeguard that trading of cryptocurrencies is regulated and enhance tax revenues for the government.

Applicability of Direct Tax
The Indian income tax laws have always sought to tax income received irrespective of the form in which it is received. Therefore, the possibility of tax on bitcoins can be looked at under the following circumstances:

1. Bitcoins Mining: Bitcoins created by mining are self-generated capital assets. Subsequent sale of such bitcoins would, in the ordinary course, give rise to capital gains. However, one may note that the cost of acquisition of a bitcoin cannot be determined as it is a self-generated asset. Furthermore, it does not fall under the provisions of Section 55 of the Income-tax Act, 1961 which specifically defines the cost of acquisition of certain self-generated assets. Accordingly, the income tax authorities may choose to tax the value of bitcoins received from mining under the head “Income from other sources”.

2. Bitcoins held as an investment being transferred in exchange for real currency:  The appreciation in value due to transfer would give rise to a long term capital gain or a short term capital gain depending on the period of holding of the bitcoin. Further, long term gains would be taxed at a flat rate of 20% while short term gains would be taxed at the individual slab rate.

4. Bitcoins held as stock-in-trade being transferred in exchange for real currency: The income arising out of bitcoins trading activity would give rise to income from business (or speculative business) and thereby taxable.

Road Ahead
In what could possibly mark the first move by the government to regulate cryptocurrencies and related transactions in India, the Corporate Affairs Ministry has made it mandatory for companies dealing with virtual currencies to disclose profit or loss incurred on crypto transactions and the amount of cryptos they hold in their balance sheets.

In a notification issued recently, the ministry announced the amendments made in schedule III of the Companies Act with effect from April 1, 2021. According to the amendments, companies, which have traded or invested in cryptos during a financial year, must disclose, “first, profit or loss on transactions involving cryptocurrency or virtual currency; second, amount of currency held as at the reporting date, and third, deposits or advances from any person for the purpose of trading or investing in cryptocurrency,”.

The mandate is also expected to boost institutional investment in cryptos. “This a major step towards regulating the crypto assets in India and will bring in a lot of transparency in reporting/filing of crypto investments. The move will boost institutional adoption of crypto assets in India and will take the Indian crypto industry to the next phase of growth. Currently, as per industry estimates, there are around $1.5 billion (INR 100 bn) invested in cryptos by around 7-8 million investors in India.