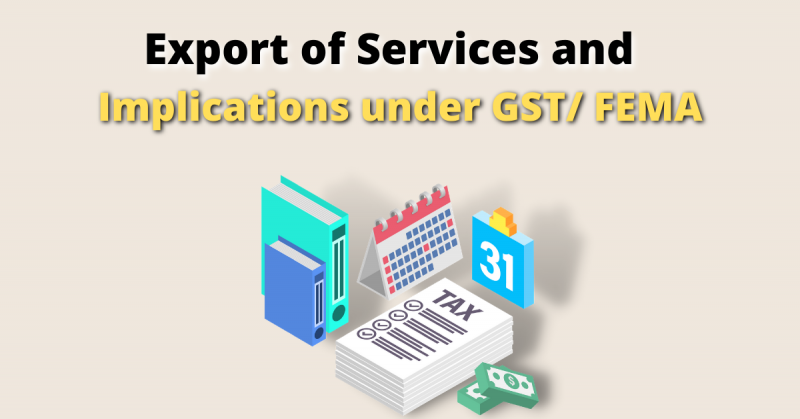 The term Export generally refers to Exports of Goods but that reference is a passé now. Export of Services is the emerging trend as it widens the scope of exports, bringing in the diversification and increasing India’s Foreign Exchange Earnings. The Indian Economy has witnessed a major boost in the last decade in the services sector.

India has emerged as the fastest growing nation in global services trade. It remained among the top 10 trading countries in commercial services in FY 2019-20 accounting for 3.5% of world services exports. Despite COVID 19 pandemic, India’s Services sector remained relatively resilient as compared to merchandise trade. As per the data released by Ministry of Commerce & Industry, the Gross Services Export receipts for the period April 2020 to March 2021 amounted to USD 202.57 Billion and the Net Services Export receipts stood at USD 85.81 billion for FY20-21. Export of Services contributed 41% of the total exports (merchandise plus services) made from India for FY 20-21.

Service sector’s significance in the Indian Economy has been steady. As per the Ministry of Statistics and Programme Implementation, Service Sector now accounts for over 54% share in Gross Value Added (GVA) of the economy and attracts almost 4/5th of total Foreign Direct Investment (FDI) inflows into India.

Exports under Goods and Service Tax (GST)
An Export in International Trade means Goods and Services produced in one country and sold to buyers in another country (Foreign buyer). Services being intangible in nature are different from export of goods. Goods are deemed to be exported once they cross the country’s border but it is not in the case of export of services.

Indian exports are becoming globally competitive basis the above treatment.

An Exporter has two options to comply with GST guidelines:

Option 1 – Export of Services after payment of IGST without any Bond or Letter of Undertaking (LUT)
As per GST laws, exporter has the option to pay IGST on exports and claim for the refund later. There are two variants in the refund:

Earlier the facility of LUT submission was available to specified category of exporters but post release of GST Circular No. 8/8/2017 dated 4th Oct 2017 all the exporters were eligible for it except in few instances where it was required to furnish Bonds. Any person who is charged for a tax evasion of amount INR 2.5 Crore and above is not eligible for LUT. Also, in cases where taxpayer does not comply with the conditions specified in LUTs within the required time, Bonds need to be submitted. The validity of LUT is 1 year. A fresh LUT needs to be furnished every financial year. LUT can be submitted online while Bonds need to be furnished manually in hardcopy.

Registered Supplier can submit a Bond or LUT in a specified format in Form RFD-11 prior to the exports on the letterhead of registered supplier to the jurisdictional commissioner. Acknowledgement Reference number (ARN) is received once LUT is accepted. In case of Bonds, additionally a bond on stamp paper along with Bank Guarantee and other supporting documents will also be furnished. There is no need for a separate bond for each transaction, instead a Running Bond can be submitted in which terms and conditions remain same for all transactions. E.g. Taxpayer gives a Running Bond of INR 2 Crore. This means he can export services worth of tax up to INR 2 Crore in numerous transactions. Once the conditions of a particular transaction are met, the Bond is free for that amount and can be reused for next set of transactions.

This Bond or LUT is nothing but a kind of promise that a taxpayer makes to pay Taxes along with interest if services are not rendered within 1 year of issuing the export invoice. Tax needs to be paid within 15 days from the end of 1 year or such period as may be allowed by the commissioner. Once the services are rendered after 1 year, benefits are given back to the exporter.

Refund for unutilised Input Tax Credit can be claimed by filing the form RFD-01/ RFD-01A. It is permissible to claim refund even if exports are made after 1 year.

Exports of Services under FEMA
Exports of Services from India is governed by clause (a) of sub section (1) and sub section (3) of Section 7 of Foreign Exchange Management Act 1999 (42 of 1999) read with Foreign Exchange Management (Current Account Transactions) Rules, 2000 further read with FEMA Notification No 23(R)/2015-RB dated January 12, 2016. These Notifications released by Reserve bank of India along with prevailing Foreign Trade Policy released by Directorate General of Foreign Trade (DGFT) lays guidance to conduct Export Trade from India.

For Service Exports, Import Export Code (IEC) is not necessary except when the service provider is taking benefit under the Foreign Trade Policy (FTP). For instance, a Service Exporter needs to mandatorily have IEC as one of the pre requisites along with other requirements to apply for Service Exports from India Scheme (SEIS).

Unlike Export of Goods, in case of Service Exports none of the forms and declarations is applicable. Service Exporter can render services to overseas buyers without submission of any forms/declarations but is liable to realize the amount of foreign exchange due into India and adhere to the below guidelines.

> Export proceeds shall be realised in freely convertible currency.

> Export proceeds against specific exports may be realised in Indian Rupee provided funds are received through freely convertible vostro account of non-resident bank in any country other than member of Asian Clearing Union or Nepal or Bhutan. (vostro account is the account held by a foreign bank with a domestic bank in domestic currency)

> It is obligatory for Exporters to realize and repatriate full value of services into India within 9 months from the date of rendering service.

> In view of current Covid pandemic, the Government of India has increased the realization period to 15 months for service exports made till 31st July 2020.

Manner of Receipt & Payment
> Amount representing the full value of services exported shall be received through an AD Bank in the manner specified in notified vide Notification No. FEMA 14 (R)/2016-RB dated 02 May 2016.

> When payment for services rendered to overseas buyers is received during their visits:

Exports receipts through Online Payment Gateway Service Providers (OPGSPs)
AD Category-I banks have been allowed to offer the facility of export realization by entering into standing arrangements with OPGSPs adhering to following conditions:

> In case the exporter fails to render the services partially or fully within the stipulated time frame, refund of advance payment post 1 year would require prior approval of RBI