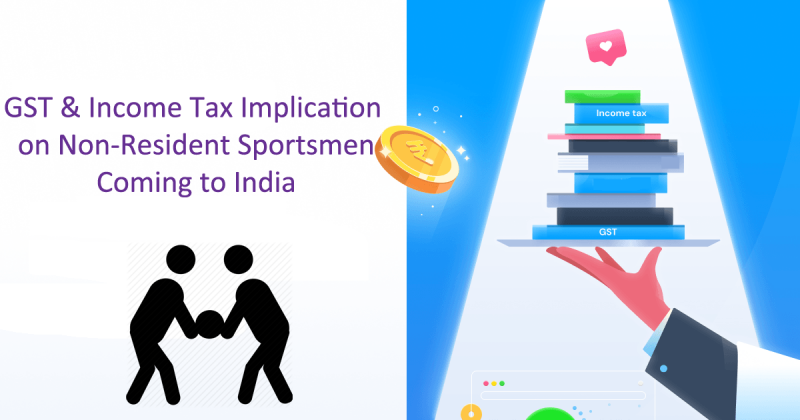 Non-Resident Sportsmen means he is not the Citizen of India.

Nowadays, it becomes very important to know about the tax Implications in case of non-resident Sportsmen due to increase in number of sports events being held in India. Few are the examples of Sports event being held in India: Indian Premier League, Pro-kabaddi league, Asian Games, Commonwealth Games and Badminton League etc.

> Meaning of Non-Resident Taxable Person (NRTP): As per Section 2(77) of CGST Act, 2017, Non-Resident Taxable Person means any person who occasionally undertakes transactions involving the supply of goods or services, or both, whether as principal or agent or in any other capacity, but who has no fixed place of business or residence in India. It also includes sportsmen and other artist who come in India for specific events to perform.

> Registration: As per section 24 of CGST Act, 2017, non-resident taxable persons must take registration mandatorily under GST Law irrespective of the minimum threshold turnover limit and irrespective of the fact that they are involved in one time or multiple taxable transactions.The registration may be obtained by filing Form REG-09 five days prior to the commencement of business and paying estimated tax in advance subject to other applicable conditions.

Instead, sportsmen may take normal registration as well if the stay in India is for longer period. But they will have to apply for PAN in India because unless that they will not be departed from the definition of NRTP.

Another alternative is that the recipient of service i.e. franchisee pay tax on reverse charge basis as the player is in Non-taxable territory by virtue of his place of residence and is supplying his service to resident service recipient. There will not be any burden of GST compliance on the part of sportsman and no tax loss to the Government.However, this is possible only of stay is for short term say less than 7 days

A tabular depiction will elaborate alternatives in much easier way,

> Residential Status:As per section 6(1) of Income Tax Act, if an individual has not complied with any of the following two conditions then such individual is considered as Non-Resident,

> Tax Rate:Section 115BBA deals with the income earned by non-resident sportsmen by participating in any game (other than winning from game taxable u/s 115BB), advertisement or contribution of article related to any game or sport in India. The income shall be taxable at the rate of 20%

> Withholding Tax:As per section 194E of Income Tax Act, TDS on payment to non-resident sportsmen shall be deducted @ [20% + surcharge if applicable + health and education cess of 4%] at the time of credit or payment whichever is earlier.

> Benefit under DTAA:Non-Resident Sportsmen can avoid paying double tax under the Double Tax Avoidance Agreement. Usually, non-resident sportsmen live outside India but earn income in India. In such cases, it is possible that the income earned in India would attract tax in India as well as in their resident country. This means that they would have to pay tax twice on the same income. To avoid this, the Double Tax Avoidance Agreement (DTAA) was introduced.

DTAA signed by India with different countries fixes a specific rate at which tax has to be deducted on income earned by residents of that country. This means that when non-resident earn an income in India, the TDS would be deducted at a rate specified in the Double Tax Avoidance Agreement with that country.

In order to claim treaty benefits the non-resident sportsmen shall be required to provide certificate of his resident of country other than India (Tax Residency Certificate) as well as such other documents and information as may be prescribed.

> Provisions per India-US DTAA: As per Article 18 of the said treaty, income derived by a resident of USA as an entertainer or as an athlete, from his personal activities as such exercised in India may be taxed in India, if the amount of the net income derived by such entertainer or athlete from such activities (after deduction of all expenses incurred by him in connection with his visit and performance) exceeds $ 1,500 or its equivalent in Indian rupees for the taxable year concerned. If the income exceeds $ 1,500, then the full amount will be taxable in country of performance.

If any sportsmen receive income less that the aforementioned amount, he may, nevertheless may be taxed under other article of this convention if the condition of such article met.

The general OECD model allow such income to be taxed in the country of performance without any amount or time threshold. However, The United State introduces the threshold of $ 1,500.

Since, it is not possible to know whether the total income will exceed $ 1,500, nothing in the convention prohibits the country of performance to withhold tax on such income. Therefore, when a US athlete perform in India then withholding tax shall be deducted as per the applicable provisions i.e. under section 194E.

Further, this article will not be applicable on others involved in performance like producers, directors, technician, physio, coaches etc. 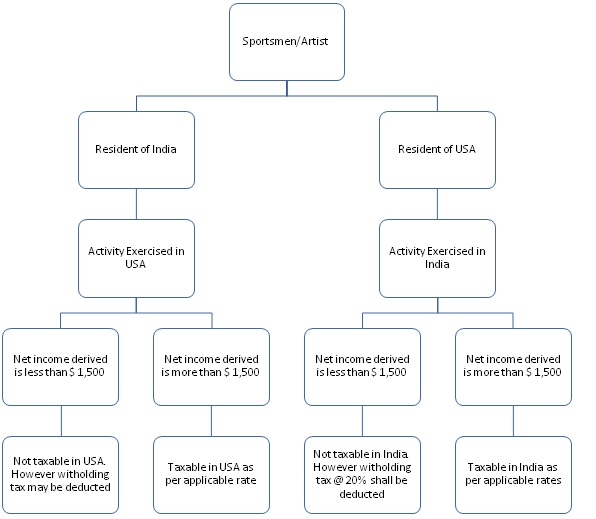 Income derived by a resident of USA in respect of activities exercised in India shall not be taxed in India if the visit of the entertainers or athletes to India is supported wholly or substantially from the public funds of the Government of USA or of a political sub-division or local authority thereof.

> Provisions per India-UK DTAA: As per Article 18 of the said treaty income derived by entertainers or athletes from their personal activities as such may be taxed in the country in which these activities are exercised. Therefore, the income of sportsmen resident of UK derived from the activity exercised in India shall be taxable in India and vice versa. In UK, the non-residents are taxed at the same rate that of residents which is as per their slab rate.

Income derived by a resident of UK in respect of activities exercised in India shall not be taxed in India if the visit of the entertainers or athletes to India is supported wholly or substantially from the public funds of the Government of UK or of a political sub-division or local authority thereof.

Almost all the countries have the same system of taxability of the athlete or entertainer i.e. the income will be taxed in the country of performance except for US treaty where threshold of $ 1,500 has been put for the income.