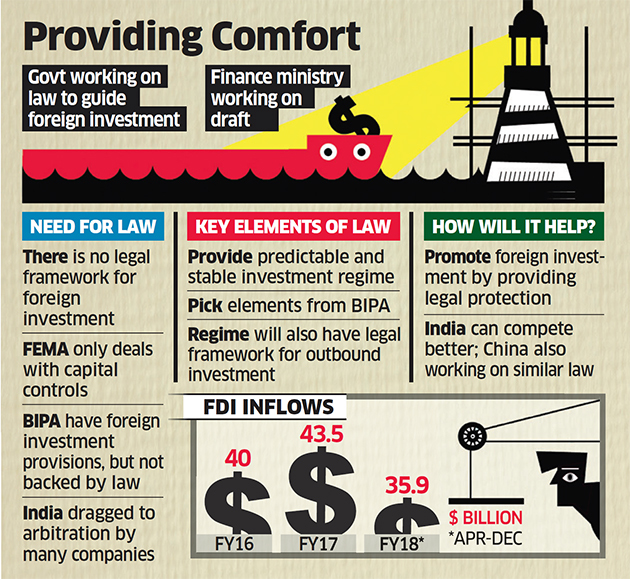 The civil aviation ministry is likely to approach the Goods and Services Tax(GST) Council soon for bringing aviation turbine fuel(ATF) under the tax regime.
Current India is working on a framework that will provide legal backing for a stable and predictable foreign investment regime in the country as it looks to attract more capital to help create jobs and accelerate economic growth.
The law that is in the works in the finance ministry is aimed at promoting and protecting foreign investments. It will spell out the rights and obligations of foreign investors and remove the grey areas that exist in the current system.
While Foreign Exchange Management Act (FEMA) deals with cross-border capital controls, a legal framework to guide foreign investment is still not in place. Bilateral Investment Promotion Agreements (BIPAs) have provisions but do not enjoy the force of law.
Most developed countries already have such laws that seek to protect and promote investment. China, one of the biggest recipients of FDI, is working on a similar law to give additional comfort to foreign investors.
The need for a clear legal framework became stark after several overseas investors dragged India into foreign arbitration proceedings and local legal disputes after running into issues such as tax claims. Subsequently, the draft text of the model investment treaty was revised in 2015 to explicitly exclude taxation measures or issuance of compulsory licences under intellectual property rights laws.

Relief for Importers! No IGST on sale of imported goods from Custom Bonded Warehouse before clearance
Generally, when an importer buys goods for further sale, he files an Into-Bond Bill of Entry and stores the goods in custom bonded warehouse. When goods are kept in the Custom Bonded Warehouse, the importers can defer the payment of Custom Duty and Integrated GST.
In case of import of goods, the IGST Act provides that imported goods shall be treated as supply in the course of inter-State trade till they cross the customs frontiers of India. Consequently, the IGST in that case shall be paid by the importers when the customs duties are payable. Thus, IGST is not payable before goods are cleared from Customs port.
The Dept. vide Circular No. 46/2017- Customs, dated November 24, 2017, clarified that when imported goods are sold to another person before clearance from customs bonded warehouse, the IGST shall be payable by the importer. The IGST shall be levied again and recovered from the buyer at the time of removal of such goods from the warehouse. This has resulted in double taxation of same transaction.
The Govt. has issued a Circular No. 3/1/2018-IGST, dated May 25, 2018 to clarify that IGST would be levied and collected only when the goods are cleared for home consumption from the customs bonded warehouse, i.e., at the time of filing the ex-bond bill of entry. This Circular would be applicable from April 1, 2018 and certainly it shall provide a big relief to the importers.

Angel Investors Cheer as New DIPP Policy on Funding Gets Less Taxing
Angel investors have been exempted by the country’s income tax department, subject to certain conditions laid down by the Department of Industrial Policy and Promotion last month, providing significant relief to the early stage investor community.
In its notification dated May 24, the Central Board of Direct Taxes stated, “The Central Government, hereby notifies that the provisions of clause (viib) of sub-section (2) of section 56 of the said Act shall not apply to consideration received by a company for issue of shares that exceeds the face value of such shares, if the consideration has been received for issue of shares from an investor in accordance with the approval granted by the Inter-Ministerial Board of Certification.”
The tax relief impacts startups that are approved by an inter-ministerial panel, in which the paid up capital and the share premium of the beneficiary company does not exceed Rs. 10 crore after the issue of shares. The notification comes into effect retrospectively from April 11, 2018.