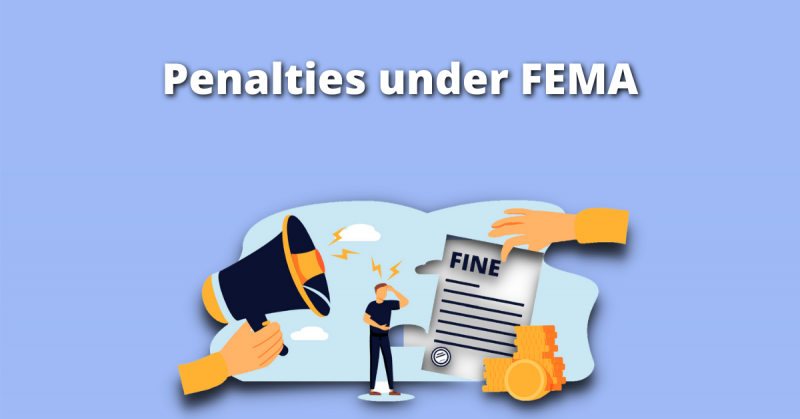 Foreign Exchange management Act, 1999 (FEMA) was passed on 29th December 1999 in Parliament replacing the Foreign Exchange Regulation Act (FERA). The new regime is made consistent with the framework laid down by the World Trade Organisation. FEMA enabled all cross border trades & payments and promotes orderly development of foreign exchange market in India.

Section 13 of FEMA lays down the Penal provisions. As per Section 13(1), if any person contravenes any provision or any rule, regulation, notification, direction or order issued in exercise of the powers under this Act, or contravenes any condition subject to which an authorization is issued by the Reserve Bank, an order shall be passed penalising the contravener up to:

As per Section 13 (1A), if any person is found to have acquired any foreign exchange, foreign security or immovable property situated outside India of the aggregate value exceeding the prescribed threshold under section 37A, he shall be liable to a penalty up to three times the sum involved in such contravention and direct confiscation of value equivalent to foreign exchange, security and money or property situated in India. Also, the offence is punishable with imprisonment for a term which may be extended to 5 years with fine (Section 13 (1C)).

Under Section 13 (1B), the Adjudicating Authority if deems fit, may recommend the initiation of the prosecution after recording the reasons in writing. And if the Director of Enforcement is satisfied, he may after recording the reasons in writing, direct the prosecution of the guilty person by filing a criminal complaint by an officer not below the rank of assistant director.

The Adjudicating Authority under Section 13(2), adjudging the contravention under section 13 (1), may in addition to any penalty, direct that any currency, security or any money or property in respect of which the contravention has taken place shall be confiscated to Central Government and if the contravener holds any foreign exchange, it shall be brought back to India or retained outside as per the direction made in this behalf.

For the purpose of this section, ‘’property’’ includes:

Enforcement of Orders of Adjudicating Authority

If the person contravening the provisions of the Act fails to make full payment of the penalty imposed on him under Section 13 within the period of 90 days from the date on which notice of such penalty is served on him, he shall be liable to civil imprisonment under this section.

Once the defaulter pays the amount mentioned in the warrant of arrest along with the cost of arrest, he shall be released with an immediate effect.