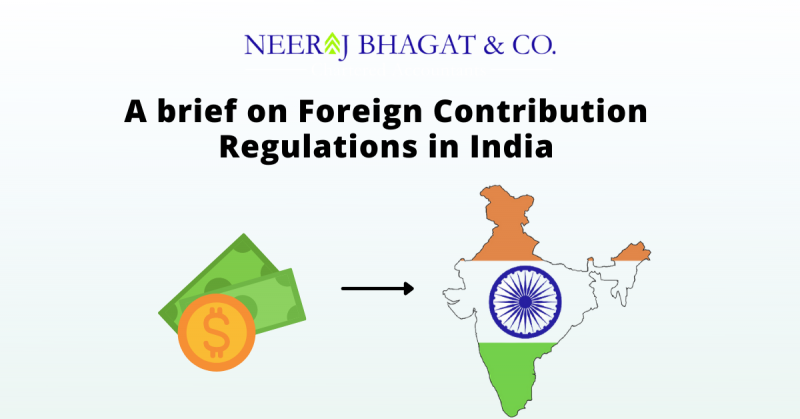 FCRA i.e. Foreign Contribution Regulation Act was earlier enacted in year 1976 by Ministry of Home Affairs (MHA) to regulate the foreign funding that received by various charitable institute, political parties, print and other media and to prevent the foreign organizations or individuals from influencing the social, political economic and religious matters in India. The 1976 Act allows the Indian Organizations and political parties to accept the foreign donation freely but by reporting the same to the MHA.

In 1984 the act was amended and it was made mandatory for the organization to get registered under FCRA before receiving any foreign funding or donations.

What is Foreign contribution
Foreign contribution means a donation, delivery or transfer of any article, any currency whether Indian or foreign, any security or share of the company made by a foreign government or its agencies, foreign companies or its subsidiary, MNCs, trust or society registered outside India or foreign citizens to an Indian person. However, article given as gift for personal use to a person upto the amount of Rs. 1 lakh is not to be considered as Foreign contribution.

If any interest has been earned or accrued from the aforesaid contribution in India shall also be considered as Foreign contribution.

However, any amount received by way of fee including fee of educational institute or in business transaction undertaken in the normal course of trade shall be outside the purview of Foreign contribution.

Who can receive Foreign contribution
Any person can receive foreign contribution subject to the condition that the same is intended to be utilized in a definite cultural, economic, educational, religious or social program. However, a prior registration under FCRA is mandatory and it should not be prohibited under section 3 of FCRA.

– A candidate for election
– Any media house or media person whether it is a columnist, cartoonist, editor, owner printer or publisher of newspaper or whether it is association or company engaged in production or broadcast of any mean of news whatsoever
– Judge or Government servant
– Member of legislature
– Political party or any organization of political nature

> Eligibility criteria under prior permission