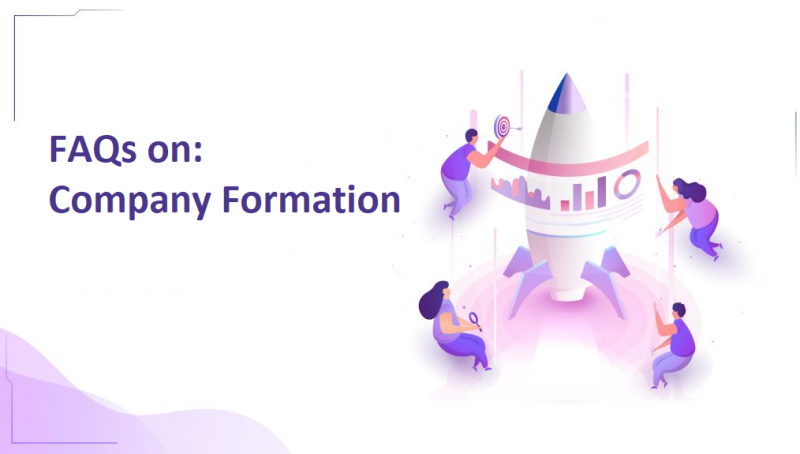 3. Can a foreign national incorporate an OPC in India?
Yes. Effective 1st April 2021, Non-Resident individual who stays in India for more than 120 days can also setup an OPC.
“One Person Company” means a company which has only one person as a member.

6. What will happen in case the proposed name of Indian Company is identical or too nearly resembles with the name of an existing Limited Liability Partnership or an existing Company?
The name shall be treated as an undesirable name and will be rejected.

8. What are the words or expression, which can be used in the name of the company only after obtaining prior approval of Central Government?
The following words and combinations thereof cannot be used in the name of a company unless the prior approval of the Central Government is obtained –
> Board;
> Commission;
> Authority;
> Undertaking;
> National;
> Union;
> Central;
> Federal;
> Republic;
> President;
> Rashtrapati;
> Small Scale Industries;
> Khadi and Village Industries Corporation;
> Financial Corporation and the like;
> Municipal;
> Panchayat;
> Development Authority;
> Nation;
> Statute or Statutory;
> Corporation
> the use of word Scheme with the name of Government (s), State, Bharat or any Government authority or in any manner resembling with the schemes launched by Central, State or local Governments and authorities
> Bureau.

9. I would like to start a Software Services Company. Can I register such a Company?
Yes, you can register a Pvt Ltd Co. to start a business in India.

10. I am a non-resident and I am a director in a Company registered in USA. Can I start a business in India and retain 100% of ownership in the name of the Company located outside India?
Yes, you can incorporate an Indian Subsidiary of Foreign Company.

13. What are the Identification documents required for a foreign director/Shareholder for incorporation of the Company in India?
> Copy of Passport
> Latest month bank statement/Utility Bill in the name of the applicant

14. What are the documents required for a Foreign Company, which will act as a Shareholder in Indian Company?
> Certificate of Incorporation
> Article and Bye-Laws
> Latest month bank statement/Utility Bill in the name of the Company
> Details of the person who will be signing on behalf of the Company incorporated outside India.

16. Whether the documents are required to be notarised and apostilled for incorporation of a company in case the subscriber/director is a foreign national?

The attestation requirement depends on the country in which registered office (in case of body corporate as a subscriber) /residence of the overseas subscriber and / or director is situated. The documents are required to be attested as follows:

17. What is an apostille?
An Apostille is simply the name for a specialized certificate, issued by the Secretary of State. The Apostille is attached to your original document to verify the authenticity of the documents so that the same can be accepted in other countries who are members of The Hague Apostille Convention.

Moreover, the Countries which are not the part of The Hague Convention are required to get the documents consularized from the Indian Embassy situated in that of a particular Country.

18. If a foreign national who will be acting as Director and/or shareholder in Indian Company is currently in India, are the apostilled documents still required?
No, in case a foreign national is in India on valid Business Visa, then all the documents for him does not required to be notarized and apostilled and the company formation application will be filed based on Business Visa, as the place of signing of all the documents shall be within India.

21. Is it mandatory to obtain PAN & TAN and what is the meaning of PAN & TAN?
PAN: Permanent Account No. (PAN) is mandatory for any Company. It is issued in the name of the Company.

TAN: Every Company is required to obtain TAN (Tax Deduction Account No.) for correspondence related to TDS (Tax Deducted at Source).

22. When can the Bank account of Indian Company be opened?
The Company once incorporated, the promoters can proceed to open its bank account

25. Is it mandatory for a foreign national to be present in India in order to take any decision?
No, Meetings of the Board can be held outside India as well.