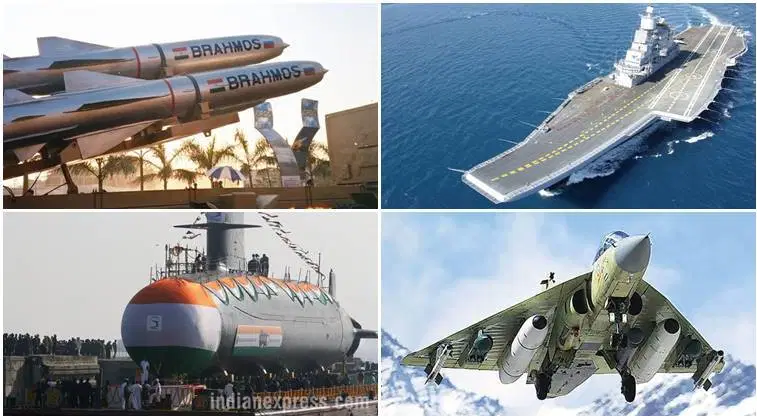 Defence Industry in India is subject to Industrial License under the Industries (Development & Regulation) Act, 1951 and manufacture of small arms and ammunition under the Arms Act, 1959. The detailed guidelines in this regard may be seen under the Press Note available at www.dipp.nic.in followed by link Acts & Rules.

Previously, India had relaxed foreign direct investment norms in defence sector, doing away with the clause that allowed only “state of the art” technology to be considered for stakes of more than 49% and thereby giving the government more power to decide on investment proposals by foreign entities.

Although the government kept the FDI limit unchanged – at 49% under the automatic route and 100% under approval route – it ushered in a major boost to the small arms manufacturing sector. DIPP vide Press Note No. 5 of 2016 Series dated 24/06/2016 notified review of Foreign Direct Investment (FDI) Policy on various sectors which includes conditions related to FDI in defence at Para 5 of the said Press Note. According to the revised guidelines, Foreign Direct Investment Cap is 100%. Foreign Direct Investment up to 49% is allowed through automatic route and above 49% under government route wherever it is likely to result in access to modern technology or for other reasons to be recorded.

The other conditions governing FDI Policy in defence manufacturing sector as notified in the Press Note 5 of 2016 Series dated 24/06/2016 are as under: 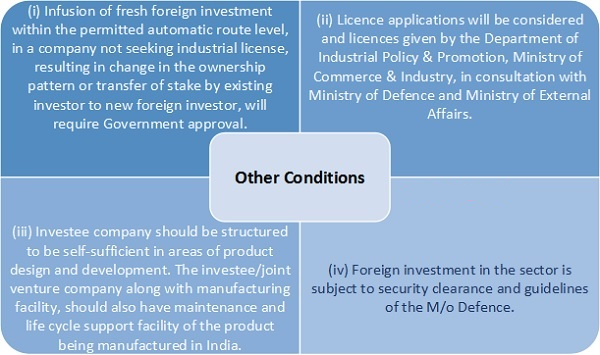 Further, the government also cleared ‘strategic partnership’ policy to create a vibrant defence manufacturing ecosystem in the country through involvement of both the major Indian corporates as well as the MSME sector.

Under the policy, selected private firms will be roped in to build military platforms like submarines and fighter jets in India in partnership with foreign entities.

Further, subsequent to abolition of the Foreign Investment Promotion Board (FIPB) by the Government vide O.M No. 01/01/FC12017-FIPB dated 05.06.2017, the work of granting approval for foreign investment under the extant FDI Policy, has been entrusted to the concerned Administrative Ministries/Departments. The Department of Industrial Policy & Promotion, Ministry of Commerce & Industry has been given the responsibility of overseeing the applications filed on the Foreign Investment Promotion Portal (FIFP) and to forward the same to the concerned Administrative Ministry. DIPP has finalized a Standard Operating Procedure (SOP) for examination of foreign investment proposals by Administrative Ministries.

However, a study has suggested that a minimum of 51 percent FDI must be allowed in defence sector without any conditions so that global players can exercise adequate control over joint ventures that will bring in capital for establishing new facilities and scaling up the current ones while benefiting India through large scale job creation. It said the government must restore and strengthen tax incentives for R&D activities to encourage investments in technological innovations by MSMEs. Given the industry is extremely capital-intensive, steps towards creating infrastructure and policy environment would propel growth of small and medium enterprises.