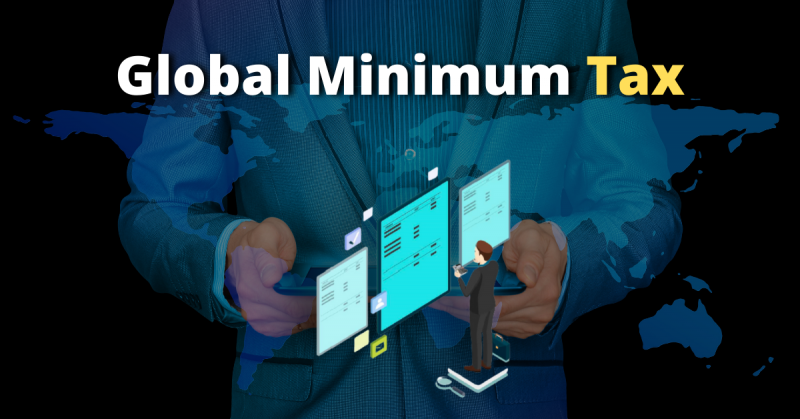 21st century world largely operates under a Global Economic System. International Business is the buzz all around & businesses are not confined to boundaries. It involves cross border transactions both in goods and services. Conducive International Business Environment is imperative for multinational companies to operate and perform. In order to promote cross border trade, the government of each economy is simplifying the trade policies easing out the way business is conducted. But the challenging and complex issue of Taxation of Multinational Company still remains unresolved.

Mostly, Multi National Companies plan to shift their base to low tax countries (Tax Haven) regardless of their customer base and sales. This results in the erosion of the tax base. Thus, corporates pay lower taxes in the tax haven countries and pay no tax to the country providing a strong customer base.

Global Minimum Tax is a framework that is proposed to update century old international tax system which no longer fits to this digitalised economy. The new tax regime aims to discourage multinational companies from making foreign investment decisions on the low tax rate basis and shifting their profits to the lower tax jurisdiction irrespective of the region where customer base is located.

Currently, the economies having the low rate tax structure is able to lure enterprises to make investments in their country causing substantial revenue loss and giving tough competition to countries having higher taxes. Big technology companies that doesn’t require significant physical presence can easily route their earnings from digital operations to tax haven countries and save taxes on the profit they earn. It leads to huge tax revenue loss for home country imposing taxes at a higher rate as well as for countries which has been an important market for such companies. The economists have named this worldwide tax competition as “race to the bottom”.

In July 2021, 131 countries across the globe representing 90% of global GDP, have agreed to the tax reform framework by Organisation for Economic Cooperation and Development (OECD) to impose Global Minimum Tax on the large corporate who are eroding the tax base by shifting to tax haven countries.

The reform rests on the two pillars:

> Re-allocation of additional share of profit to the market jurisdiction

Pillar 1 would ensure that the new tax plan would be linked to the places where actual business activities are centred rather than where the multinationals are headquartered.

Pillar 2 proposes to enforce a minimum corporate tax @ 15% by all the corporate across globe. However each nation could still have a choice to set a lower tax rate, but then if the company pays a lower tax in a particular country, their home government could top up their taxes to the global minimum rate and go away with the benefit of shifting profits. It will bring uniformity in corporate taxation worldwide.

1. Getting all the nations on the same page is difficult and until all the countries agree to this framework, the loopholes in laws may continue to benefit certain countries which would ultimately defeat the very purpose.

2. Final agreement to this new framework will have major repercussions for tax haven countries. They would no longer be able to attract foreign investments basis the lower tax rates.

3. For global corporate minimum tax to be fair and acceptable, it has to define standard base for income. Since tax laws in each country vary in design and complexity resulting in different income tax base and rules, it is going to be tedious task to ascertain standardised income base.

4. Deciding on the tax policy is a sovereign function and depends majorly on nation’s economic requirement but application of Global Minimum Tax would take away the countries control over its domestic corporate taxation.

5. Before the new regime is brought into practice, various metrics needs to be worked on and finalised. Apportionment of profits between country of business operation and home country, details of exemptions, threshold etc still need to be hammered out.

Going optimistically, participants in the negotiation aim to finalise all the remaining technical work by October 2021 with the target of effective implementation from 2023. Since many countries are involved, requiring amendments in their respective tax laws and adoption of new tax treaty between countries, this timeline might get stretched.