‘Project Office’ means a place of business to represent the interests of the foreign company executing a project in India but excludes a Liaison Office.

The project office is the ideal method for companies to establish a business presence in India, if the object is to have a presence for a limited period of time. It is essentially a branch office set up with the limited purpose for executing a specific project. Foreign companies engaged in turnkey construction or installation normally set up a project office for their operations in India.

Foreign Companies who have been awarded a contract to execute a project in India, select the mode of execution of the project, through project offices duly registered with the Reserve Bank of India (RBI) and the Registrar of Companies (ROC). ‘Project Office’ also represents the interests of the foreign company executing a project in India as in the case of Liaison Office with the only difference, that Project Office can undertake commercial activities related to the particular project whereas the liaison office cannot.

Revised Regulations 2016 under FEMA has delegated all powers of approving applications to AD banks except few cases.

In this article, we would discuss various aspects and procedure for setting up project office in India as per revised guidelines.

A foreign company may open project office/s in India provided it has secured from an Indian company, a contract to execute a project in India, and 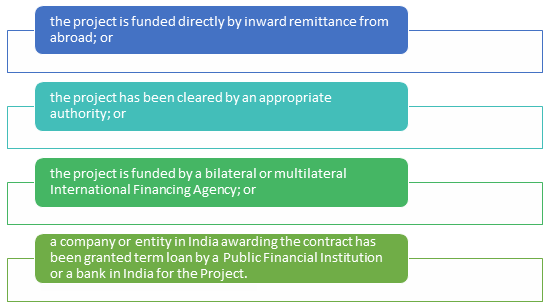 1. RBI has given general permission for opening of Project Office in India if the above conditions are satisfied. However, if any entity resident in Pakistan, Bangladesh, Sri Lanka, Iran, Afghanistan, China, Macau and Hong-Kong desires to open project office in Jammu & Kashmir, North Eastern States and Andaman and Nicobar islands, approval is granted by RBI in consultation with Government of India. In all other cases, Authorized Dealer Category-I banks are empowered to grant approval.

2. Principal business falls in defence/telecom/private security/ information and broadcasting sector. However, no separate reference or approval of the Government of India (GoI) will be required in respect of proposal for opening of a PO relating to the defence sector, if contract for which the PO is opened has been awarded by/entered into with the Ministry of Defence or Service Headquarters or Defence Public Sector Undertakings;

The application for establishing PO in India may be submitted by the non-resident entity in Form FNC (Annex B) to a designated AD Category – I bank (i.e. an AD Category – I bank identified by the applicant with whom they intend to pursue banking relations) along with the prescribed documents mentioned in the Form  . The AD Category-I bank shall after exercising due diligence in respect of the applicant’s background, and satisfying itself as regards adherence to the eligibility criteria for establishing PO, antecedents of the promoter, nature and location of activity of the applicant, sources of funds, etc., and compliance with the extant KYC norms grant approval to the foreign entity for establishing PO in India. The AD Category-I banks may frame appropriate policy for dealing with these applications in conformity with the FEMA Regulations and Directions.

Note: Regulation 2016 requires applicants from Bangladesh, Sri Lanka, Afghanistan, Iran, China, Hong Kong, Macau or Pakistan, who are desirous of opening BO/PO/LO in India, to register with relevant state police authorities. Additionally, the AD Bank is required to mark a copy of the approval letter for “persons” from these countries to the Ministry of Home Affairs, Internal Security Division-I, GoI, New Delhi for their record or necessary action.

The PO remains valid for the entire tenure of the project (till the project is completed or wound up).

Important points to be noted

Remittance of Profit or Surplus

PO is permitted to remit outside India profit of the project net of applicable Indian taxes.

However, authorized Dealer Category – I bank may permit intermittent remittances by project offices pending winding up / completion of the project subject to submission of certain prescribed documents as below:

a. The Project Office submits an Auditors’ / Chartered Accountants’ Certificate to the effect that sufficient provisions have been made to meet the liabilities in India including Income Tax, etc.

b. An undertaking from the Project Office that the remittance will not, in any way, affect the completion of the Project in India and that any shortfall of funds for meeting any liability in India will be met by inward remittance from abroad.

Inter-Project transfer of funds requires prior permission of the Regional Office concerned of the Reserve Bank under whose jurisdiction the Project Office is situated.

Under Regulation 2016, a specific clause in respect of filing of AAC by PO has been included. The Annual Activity Certificate (AAC) in Form FNC (Annex D) shall be submitted to the designated AD Category –I Bank by the following:

This AAC is to be obtained from a Chartered Accountant showing the Project Status and certifying that the accounts of the Project Office has been audited and the activities undertaken are in conformity with the General / Specific permission given by the Reserve Bank.

Every Foreign company is required to submit below documents to the Registrar of Companies for registration, within 30 days of the permission of RBI/AD Bank:

2. Full address of the registered or principal office of the company

3. List of the directors and secretary of the company containing such particulars as prescribed under Rule 3.

4. Name and address or the names and addresses of one or more persons resident in India authorized to accept on behalf of the company service of process and any notices or other documents required to be served on the company

5. Full address of the office of the company in India which is deemed to be its principal place of business in India

6. Particulars of opening and closing of a place of business in India on earlier occasion or occasions

7. Declaration that none of the directors of the company or the authorized representative in India has ever been convicted or debarred from formation of companies and management in India or abroad.

8. Other Documents as may be prescribed.

Rule 3(3) of the Companies (Registration of Foreign Companies) Rules, 2014 requires application in eForm FC-1 to be supported with an attested copy of approval from the Reserve Bank of India/AD Bank under Foreign Exchange Management Act and the rules and regulations thereunder or a declaration from the authorized representative of such Foreign Company that no such approval is required.

And Rule 3(4) provides that in case of any alteration in the aforesaid documents the Foreign Company is required to submit a return in eForm FC-2 containing the particulars of alteration as per the prescribed format with the Registrar of Companies, within 30 days of any such alteration.

Conclusion
India is one of the fastest growing economy in the world. The government is making all the efforts to make it one of the best places for doing business. The latest RBI guidelines regarding establishment of Project Office have been issued with the aim to facilitate ease in doing business in India and liberalizes the procedure for non-residents to set up a place of business in India by delegating several powers of the RBI to AD Bank. It, thereby, makes the entire process time efficient as well as more transparent.