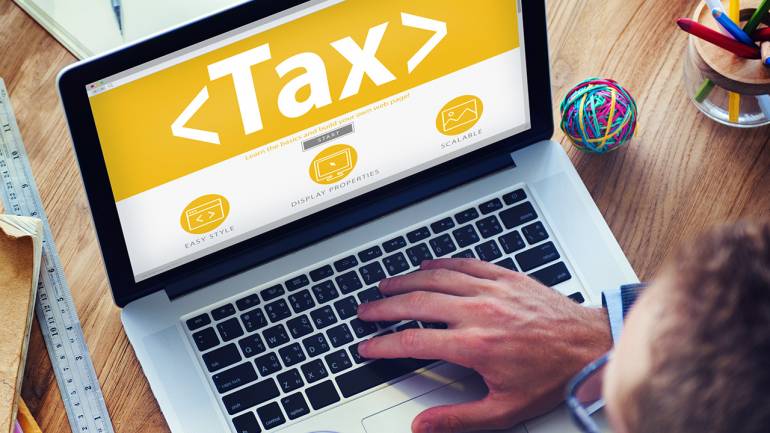 The income tax department Thursday proposed change in the methodology for taxing multinational companies, including digital firms, having permanent establishment in India by giving weightage to factors like domestic sales, employee strength, assets and user base. The CBDT Committee on ‘Profit Attribution to Permanent Establishment (PE) in India’ also said MNCs that are incurring global losses or a global profit margin of less than 2% and have operations in India will be deemed to have made a profit of 2% of Indian revenue or turnover and will be taxed accordingly. The CBDT committee report has proposed that sales, employees (manpower and wages) and assets in India of a multinational corporations (MNCs) should be taken into account for determining domestic tax liability.

Tax Refund in the Works for Exports to US
The government is considering a scheme to refund taxes imposed on India’s exports to the US that will suffer loss of competitiveness once the concessional duties enjoyed under the Generalised System of Preferences (GSP) are withdrawn.
A Rebate of State Levies (ROSL) kind of scheme, which would refund unrebated taxes that are included in the price of goods, would incentivise exporters and ensure India’s shipments do not drop. The unrebated taxes would be refunded through the drawback route.
“Leather, textiles, some lines of organic chemicals, and nuclear reactors and boilers are some sectors that are likely to face a disadvantage. The government may consider ROSL for these sectors,” an official in the know of the development said.
While most Indian exports are incentivised through the Merchandise Exports from India Scheme, the programme has been disputed by the US for violating the World Trade Organization (WTO) rules.
ITC balance shall lapse for eligible persons who intend to pay GST @ 6% under new presumptive scheme
CBIC vide its notification no. 09/2019 CT (Rate) and 09/2019 UT (Rate) dated March 29, 2019, has notified that ITC lying in the electronic credit ledger of the eligible person shall lapse and the rules applicable to composition dealers shall apply to service providers opting to pay GST at 6% as per the new presumptive scheme as per notification no. 02/2019- CT (Rate). This notification shall come into force, w.e.f., April 1, 2019.

Key Changes in New ITR Forms for Assessment Year 2019-20
The Central Board of Direct Taxes (CBDT) has notified the Income-tax Return (ITR) Forms applicable for the Assessment Year 2019-20. This time the ITR forms have been changed with two major objectives – to incorporate the changes made by the Finance Act, 2018 and to seek additional disclosures. The additional disclosures have been sought by the CBDT in respect of all those income which are often subject to tax disputes or which are prone to tax avoidance. By making the changes in current year ITR forms, the Dept. has increased the scope of disclosure and the scope to uncover the under-reporting or wrong-reporting of income. The Finance Minister while presenting the Interim Budget, 2019 has revealed that last year 99.54% of the Income-tax returns were accepted as they were filed. With this level of disclosures, the Dept. can easily flag the doubtful returns to unearth the possible tax avoidances at the time of processing of return by the CPC.

Director-KYC needs to be done within period 30 days from date of deployment of e-form: MCA clarifies
As per rule 12A of the Companies (Appointment and Qualification of Directors) Rules 2014, “every individual who has been allotted a Director Identification Number (DIN) as on 31st March of a financial year as per these rules shall, submit e-form DIR-3-KYC to the Central Government on or before 30th April of immediate next financial year. Provided that every individual who has already been allotted a Director Identification Number (DIN) as at 31st March, 2018, shall submit e-form DIR-3 KYC on or before 5th October, 2018.”
The revised form, which will be shortly deployed, can be filed without any fee within a period of 30 days from the date of deployment. Accordingly, DIN holders who had filed DIR-3 KYC form earlier and complied with the said provisions may kindly await the deployment of the modified form for fulfilling their compliance requirements.

Older Debt Restructuring Schemes may be Revisited
Erstwhile debt-restructuring plans, such as CDR and S4A, are likely to see a new lease of life with defaulters seeking recourse to such mechanisms to ensure that promoters don’t face the imminent threat of losing the companies they have hitherto run.
In February 12, 2018, the RBI had withdrawn all existing debt restructuring schemes — S4A, CDR, JLF, and SDR — and asked banks to draw resolution plans for all assets where the banking sector’s exposure was more than Rs. 2,000 crore.
Now, banks can go back to the erstwhile negotiated plans if the borrower defaults.
With the court ruling, the focus would shift to balancing the twin needs of financing and ring-fencing the loan exposures.