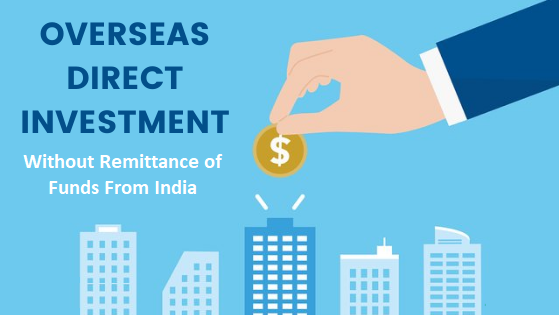 An Indian Party can make overseas direct investment in any bonafide activity. However, Real estate and banking business are the prohibited sectors for overseas direct investment. But, Indian banks operating in India can set up JVs/WOSs abroad provided they obtain clearance under the Banking Regulation Act, 1949, from the Department of Banking Regulation (DBR) and RBI.

Note: *When more than one such company, body or entity makes investment in the foreign JV/WOS, such combination will also form an “Indian Party”.

Forms of Entity that An Indian party can form for Overseas Direct Investment :- 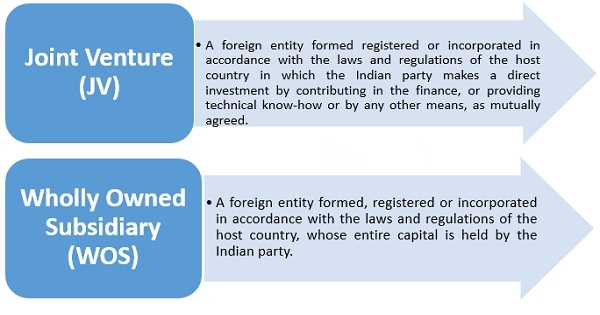 ♦ In both the cases, an Indian Party should approach an Authorized Dealer Category – I Bank (hereafter, referred as “AD bank”) with an application in Form ODI Part-I along with the prescribed enclosures / documents.

♦ The AD bank should report the relevant Form ODI in the online OID application and obtain UIN while executing the remittance and intimate to the Remitter which shall be used by him in all the future communication made with RBI.

Transfer By Way of Sale of Shares of JV/ WOS Outside India: –
An Indian Party may transfer by way of sale to another Indian Party or to a resident outside India, any share or security held by it in a JV/ WOS outside India subject to following conditions:

Further, An Indian Party may disinvest, without prior approval of the Reserve Bank, in any of the under noted cases where the amount repatriated after disinvestment is less than the original amount invested:

However, in such cases, IPs can approach the Reserve Bank for prior approval through their Authorized Dealer Banks which will be considered on a case to case basis, depending on the merits of the case.

Investment in foreign securities Other than by way of Direct Investment:-
By Way Of – Gift/ Inheritance/ ESOP

♦ the shares under ESOP scheme are offered by the issuing company globally on uniform basis; and

♦ an annual return is submitted by the Indian company to RBI through AD Bank giving details of remittance/ beneficiary etc.

Statement of shares allotted to Indian employees / directors under ESOP

a) M/s ……………. (foreign company) has issued ………… shares to our employees under ESOP Scheme during the year as under

c) the information furnished above is true and correct to the best of our knowledge and belief.

Signature of the Authorised Official :