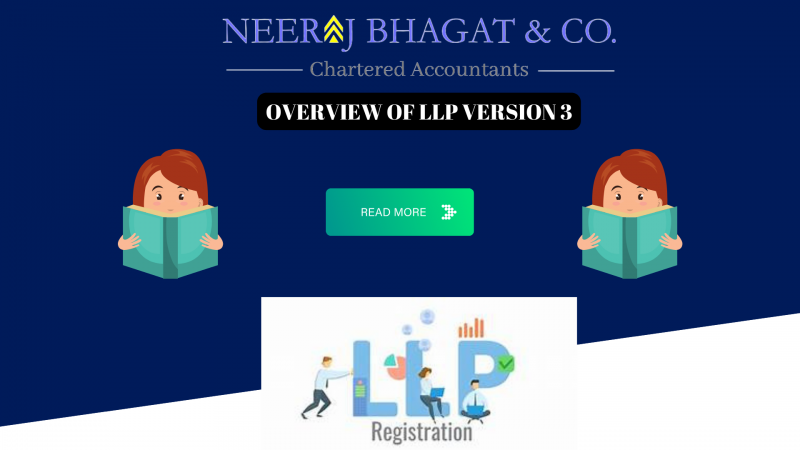 As of now the LLP Services have been discontinued on V2 portal and have been migrated to Version 3 (V3) portal.

V3 is an enhanced version of the V2 portal and is presently live only for LLP’s. The V3 portal presently enables the following for LLP’s.

LLP forms have been migrated to V3 while Company forms are still in the Version 2 of the portal. This phased migration is done to enable smooth transition of the portal.

In the version 2, forms are required to be filled and uploaded in the portal while in V3 the forms are to be filled online (i.e. Web based). This enables user convenience including the ability to save a half filled form and file it later Further in Version 2, there was only a My Workspace which had a list of notices from MCA and circulars issued by them .

In Version 3, there is a personalized “My Application” feature which allows one to view all the forms filed by them till date along with the status of the forms such as pending for DSC upload, Under Processing, Pay fees, Resubmission etc. When a user logs in to V3, the login is through the email id whereas in V2 it was possible with the user id When a business user logs in to the MCA system, an OTP will be sent to your mobile and e mail address to ensure the authenticity of the user.

PROCESS OF USER AND REGISTRATION

In V3, a user can be a registered user or a business user.

Registered users comprise of any individuals. Such users can only perform 2 functions in the LLP module – RUN Form and fillip form.

While, a business user can be any of the following and they can access and file all the forms.

However, the “Professional User” in V3 was earlier termed as “Practicing Professional” in V2 portal.

Existing user of V2, need not register once again in V3. The system will identify the mail id that you give as a duplicate id and not permit a registration once again but if attempt to register with a new mail id which was not in V2, you will be created as a new user.

Registrations in V3 when already an existing user in V2 should be avoided.

Go to the Tab Sign in / Sign Up in the mca.gov.in site. There will be a button called “Register” between the buttons for Login for LLP filing and Login for Company filing. The registration can be done by clicking this button. This registration for a new user will enable you to file both Company (V2) and LLP forms (V3).

The following will be needed for registration based on category of the user. Some requirements are generic across all categories, there are special data requirements for other categories such as:

HOW TO LOGIN IN LLP V3 PORTAL ON MCA?