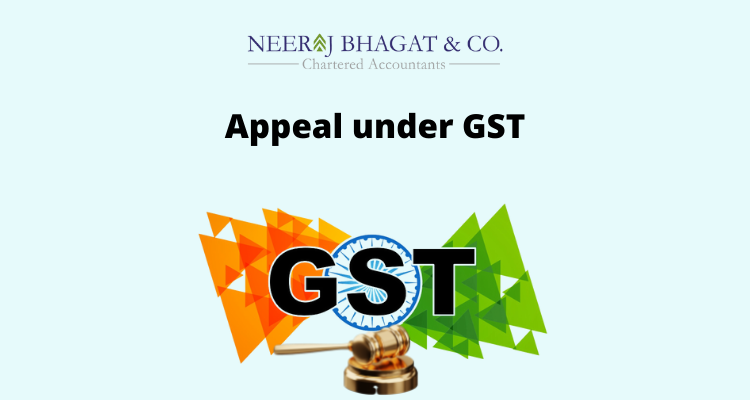 Any person aggrieved with the order passed by an adjudicating authority can file an appeal in GST before the First Appellate Authority.

Time Limit for filling an appeal –
The appeal shall be filed within three months from the date of communication of order by adjudicating authority. However, as per the provision of condonation of delay in filling appeal, maximum one more month is allowed that to only after furnishing of a justified reason of delay along with suitable evidence.

Appeal Fee –
No Appeal fee is levied as such

Requirement of Pre-deposit before filling an appeal –
With the filing of appeal, a specific amount has to be deposited as per below –
i) In respect of the amount admitted – 100% of tax, interest, fine, fee and penalty
ii) In respect of disputed amount – 10% of the tax in dispute, subject to maximum of twenty five crore rupees

However, in case of order with respect to detention or seizure, 25% of the penalty as specified in the order has to be paid.

Adjournment of hearing –
The appellate authority may adjourn the hearing upto three times on showing of sufficient cause at any stage of hearing.

Time Limit to decide an appeal –
Every appeal shall be decided within a period of one year from its filling, if it is possible to do so for the authority.

Want to add another ground of appeal at the time of hearing? Additional ground of appeal is allowed, if the authority is satisfied that the omission of that ground was not willful or unreasonable.

Refund of Pre-Deposit
Where the pre-deposit is liable to be refunded in pursuance of appellate authority’s order, the taxpayer may file a refund application then the amount of pre-deposit shall be refunded along with interest from the date of payment of such amount till the date of refund.