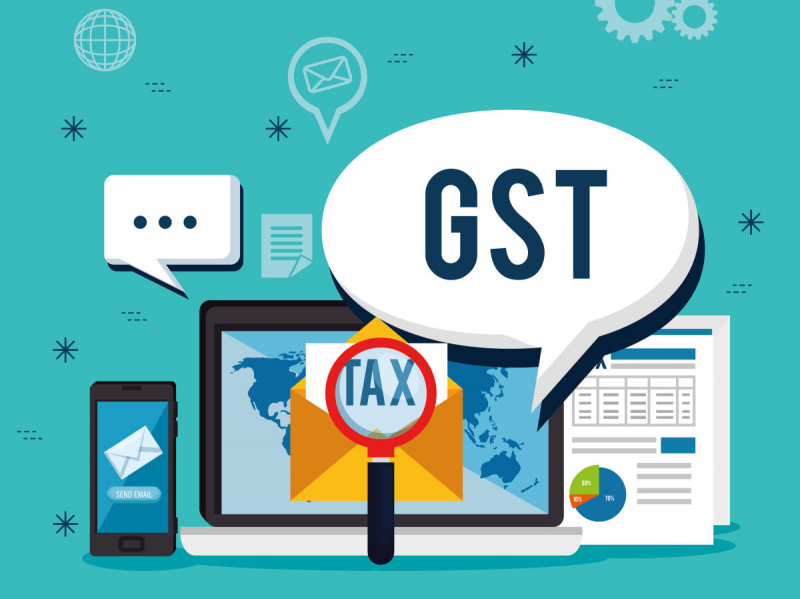 The recent ruling by GST AAR Rajasthan in the case of M/s Clay Crafts India Pvt Ltd., it was held that the Directors of the company cannot be considered as the employee of the company and thus they are outside the purview of Clause (1) of Schedule III of CGST Act, 2017 and the consideration paid by the company to the directors in any manner, whether as salary or commission, shall be taxable under GST in the hands of the company on reverse charge basis as per entry no. 6 of Notification No. 13/2017 dated 28.06.2017.

This ruling, however raised a concern over corporates who are opposingthat directors who are functioning as the employee of the company and getting the salary in lieu of their remuneration and therefore, there is a relationship of employee-employer between the director and the company. This will fall under the Clause (1) of Schedule III of CGST Act, 2017 which reads as “ACTIVITIES OR TRANSACTIONS WHICH SHALL BE TREATED NEITHER AS A SUPPLY OF GOODS NOR A SUPPLY OF SERVICES-1. Services by an employee to the employer in the course of or in relation to his employment.”

To clarify the matter, CBIC issued a clarification dated 10.06.2020 wherein the matter was simplified. To cater with the problem, CBIC segregated the issue of remuneration to directors in two categories: –

1. One is remuneration paid by companies to the independent directors defined in terms of section 149(6) of the Companies Act, 2013 or those directors who are not the employees of the said company

2. Secondly, remuneration paid by companies to the whole-time directors including managing director who are employees of the said company

So, it is clear that an independent director cannot be said to have an employee-employer relationship with the company and surely will be outside the scope of Schedule III.

Accordingly, the Board decided that remuneration paid to Independent Directors shall be taxable in the hands of the company on reverse charge basis.

Whole-time directors including managing director who are employees
As per Section 2(94) of Companies Act, 2013, a Whole-time Director includes a director in the whole-time employment of the company.

And, as per Section 2(53) of Companies Act, 2013, Manager includes a director or any other person occupying the position of a manager, by whatever name called, whether under a contract of service or not;

Also, as per Section 2(54) of Companies Act, 2013, Managing Director means a director who, by virtue of the articles of a company or an agreement with the company or a resolution passed in its general meeting, or by its Board of Directors, is entrusted with substantial powers of management of the affairs of the company and includes a director occupying the position of managing director, by whatever name called

After combine reading of these definitions, we can conclude that a Whole-time Director or Managing Director or Manger may include an employee who get salary and commission as well for other services. It would be pertinent to examine whether the activities performed by the person are in the nature of a “Contract of Service” or “Contract for Service”.

A contract of service is an agreement between an employer and an employee. While in a contract for service, an independent contractor, such as a self-employed person or vendor, is engaged for a fee to carry out an assignment or project.

Clearly, if Whole-time Director or Managing Director is also an employee and there is contract of service exist, then probably it will be a case of employee-employer relationship and thus far this will be covered under Schedule III.

Now, to make it more clear and to remove ambiguity on the issue, CBIC take the reference of provisions in Income Tax Act, 1961. Department suggest that if the company is deducting TDS under Section 192 of the Income Tax Act on the remuneration paid to the Whole-time Director or Managing Director and declared this amount as ‘Salaries’ in the books of account, then it will not be taxable in GST being employee-employer relationship which is covered under Schedule III.

On the other hand, if the company is deducting TDS under Section 194J of Income Tax Act as Fees for Professional Service and declared separately in the books of account as other than salary, then it will be outside the scope of Schedule III and accordingly taxable in GST in the hand of the company on reverse charge basis.

Let’s better understand this by taking a practical situation. Assume, Mr. A is a Whole Time Director who is also a Managing Director looking over the procurement of the company for which he gets Salary of Rs. 20 lakhs. Additionally, Mr. A charges Rs. 5 lakhs for services of giving guarantee for loan taken by company. The company deduct TDS u/s 192 of Income Tax Act, 1961 on the payment of salary and TDS u/s 194J of Income Tax Act, 1961 on the payment of service charges. In the books of account of the company, the payments are shown in different heads of expense. Also, Mr. A is filing his personal Income Tax Return showing salary income and service charges separately and pays tax accordingly.

In this case, the company is liable to pay GST on reverse charge basis on the amount of Rs. 5 lakhs only.

Now, suppose Mr. A is an Independent director in the company and charges Rs. 10 lakhs as his remuneration. Company declares in the books of account as Salary to director and deduct TDS under Section 192 of Income Tax Act.

In this case also, the company is liable to pay GST on Rs. 10 lakhs on reverse charge basis as an Independent director cannot be an employee of the company. It will be outside the scope of Schedule III.

To further understand the situation a graphical depicts is as below, 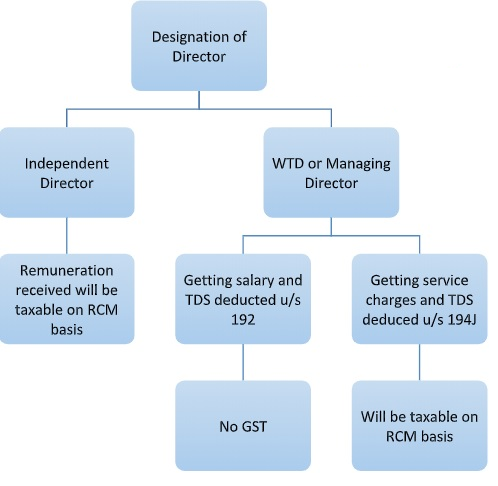