With the globalization of Indian economy and increase in development of international trade the movement of workers across the world has also been increased. Social security is an important aspect while structuring the international assignments for the employees. Any social security benefit payable in the host country may become an added cost to the employer, especially in situations where there are restrictions for withdrawal. It is in this context that social security agreements (“SSAs”) executed between countries came into perspective and they need to be carefully evaluated to help reduce the financial implications.

Until now, the Indian employees working abroad/ foreign employees working in India were excluded from the purview of the PF Act. Whenever any Indian national was deputed overseas, he was required to contribute to the social security fund of that country. Normally, such contribution was paid by the employer company. However, when such employee used to return to India, unless he completed laid down criteria, he was not allowed to withdraw the amount contributed to the social security fund of that country in terms of the withdrawal rules of the other country. The result was that employee and the employer company suffered financial loss.

a) He has worked or is going to work in a foreign country;

b) With that foreign country, India has entered into a Social Security Agreement (SSA); and

c) Such employee being eligible to avail the benefits under a social security program of that country, is availing of benefits as per the SSA.

A foreign employee is deemed to be an International Worker if:

a) He is other than an Indian Employee not holding Indian passport; and

b) Works for an establishment to which the Indian provident fund legislation applies.

It implies that if an Indian employee who is working in Foreign country with which India has not entered into SSA (Social security Agreement) will not be covered under International Worker and such employee is required to contribute in the Social security scheme of that country in which he is working. Also, international workers working under employment visa are subject to these regulations, contractual work and short- term business visit is exempt from the EPF regulations.

Social Security Agreement
An SSA (also known as Totalization Agreement) is a bilateral instrument to protect the social security interests of workers posted in another country. Indian employees, who are posted to other countries by their Indian employers, without terminating the contract of employment, continue to make social security contribution in India as per Indian law. On account of the assignment undertaken in the other country, they may also be required to make social security contribution under the host country’s laws. Generally, such employees do not derive any benefit from such contributions made outside India on account of restrictions on withdrawal and stipulations pertaining to duration of stay. Being a reciprocal arrangement, an SSA is intended to provide for avoidance of double coverage i.e., coverage under the social security laws of both the home and host countries. Ordinarily, an SSA addresses 3 issues, namely:

1. Detachment: A ‘detached worker’ posted in an establishment in India but contributing to the social security program of the home country in terms of the bilateral Social Security Agreement signed between that country and India shall be an ‘excluded employee’ under these provisions and is not required to contribute to the Social Security scheme of the host country.

2. Exportability of Pension: A provision which allows international workers who are sent on assignment to another country, that employee is making contributions towards the Social Security scheme of the host country and exporting benefits to their home countries, on completion of their assignment or on retirement.

3. Totalization of Benefits: The period of service rendered by the employee in a foreign country is counted in determining the eligibility of benefits.

A table below showing major difference between provisions applicable in case of SSA countries and Non-SSA countries:

Let’s understand with a graphical depiction as below, 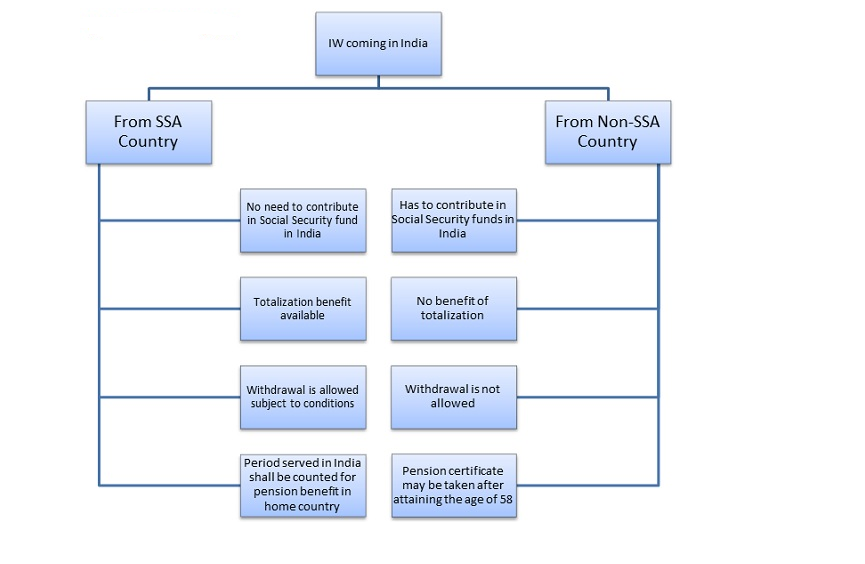