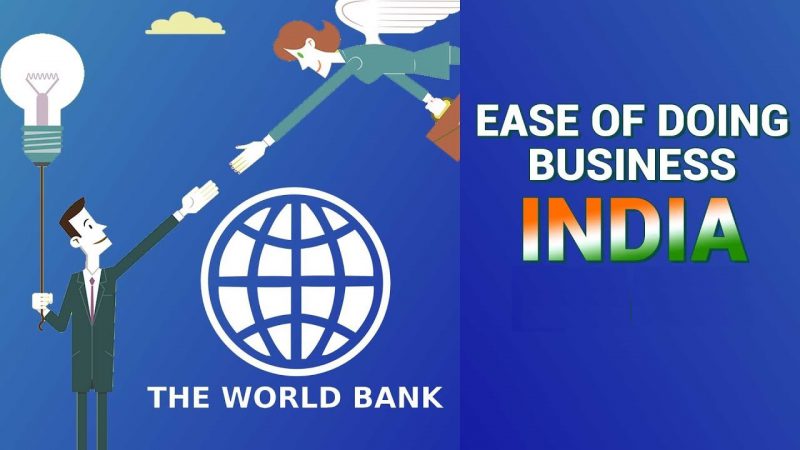 India has jumped 14 places to the 63rd position among 190 nations on the World Bank’s ease of doing business ranking released on Thursday. Last year, India was on 77th position. The World Bank has commended the reform efforts undertaken by the country “given the size of India’s economy” in its ”Doing Business” 2020 report,India has improved its rank on 6 out of 10 parameters relating to starting and doing business in a country.The parameters for determining ranking on ease of doing business in a country are paying taxes, getting credit, resolving insolvency, construction permits, getting electricity, registering of property, starting a business, trading across border.

DPIIT kickstarts exercise to ease FDI norms more
The Department for Promotion of Industry and Internal Trade (DPIIT) on Tuesday kickstarted an exercise to relax India’s foreign direct investment norms.
The department held an inter-ministerial meeting to discuss further opening up in sectors, especially where 100% FDI is not allowed on the automatic route.
The department has asked ministries and departments to submit specific proposals wherever they seek scope for relaxation. The next meeting is likely in 2-3 weeks. The exercise comes two months after the government opened up FDI in contract manufacturing and eased norms for overseas investors in single-brand retail and coal mining.

Defence FDI through Auto Route may be hiked to 74%
India plans to widen its doors to foreign funds in the defence sector to boost local production of armaments and cut down on imports. The department for promotion of industry and internal trade (DPIIT) and the defence ministry are in talks to ease many conditions to encourage foreign investors to set up shop here. It may also restructure the offset and export policies.The country allows up to 49% foreign direct investment (FDI) in defence in the automatic route and it needs government approval to go beyond the cap. This round of liberalisation is expected to raise the limit for automatic clearance to 74% along with relaxation in other conditions.

Panel for Easier Entry to Foreign Investors
A high-level advisory group (HLAG) on trade and policy has recommended simpler regulatory and tax framework for overseas investment funds, allowing individual investment from abroad in Indian debt and capital markets, and state-specific policies to facilitate foreign direct investment in agro-processing.
The group also favours a single ministry for the regulation of medical devices across the value chain, an independent commission on pharmaceuticals and biotechnology, a simpler medical visa regime and health insurance portability of social security entitlements across countries.

MAT removal for SEZs on the cards
To raise investments and boost exports from the Special Economic Zones (SEZs) across the country, the government is considering removing minimum alternate tax (MAT), reduction of duties on domestic sales and allowing job work.
At an inter-ministerial meeting last month, the Piyush Goyal-led commerce department has asked the revenue department to consider whether MAT can be removed from the export turnover from SEZs, sources said.
The government last month cut MAT to 15 per cent from 18.5 per cent, while also slashing the corporation tax rate to 22 per cent from 30 per cent. However, the Central Board of Direct Taxes also issued a detailed circular that MAT credit will not be available to a company that opts for lower corporation tax rate.

Next FTP May Reduce Raw Material Costs to Boost Sliding Exports
India’s upcoming foreign trade policy is likely to ease the norms for import of raw materials and capital goods for exporters in a bid to provide a boost for exports, hit by sluggish global demand.
The Foreign Trade Policy 2020-25 will also offer higher export rewards to products with geographic indication (GI) tag such as Alphonso mango, Banarasi sarees and Moradabadi metal craft with the Make in India scheme being at its core
The commerce department also proposes to lay special emphasis on services and ecommerce in the upcoming policy that is to come into effect on April 1, 2020.