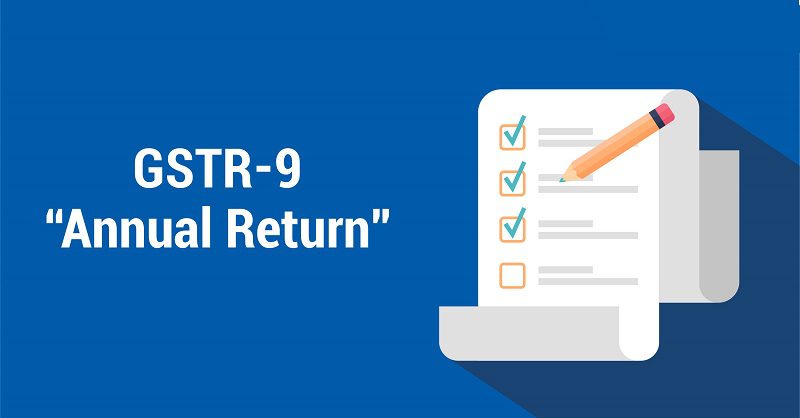 GSTR 9 is an annual return to be filed yearly by taxpayers registered under GST. It must be filed by the GST registered taxpayers (including those registered under composition levy scheme). It consists of details regarding the outward and inward supplies made/received during the relevant previous year under different tax heads i.e. CGST, SGST & IGST and HSN codes. Basically, it is a consolidation of all the monthly/quarterly returns (GSTR-1, GSTR-2A, GSTR-3B) filed in that year.

For Composition Registered taxpayers they are required to file Form GSTR-9A.

Who should file GSTR 9?

Every Registered person, other than the following 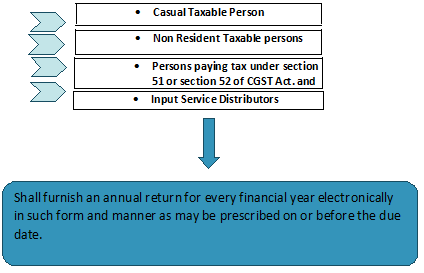 What is the due date to file GSTR-9?

GSTR-9 is to be filed on or before the 31st of December of the subsequent financial year. However, the Government has the power to extend this due date to such other date it considers necessary. 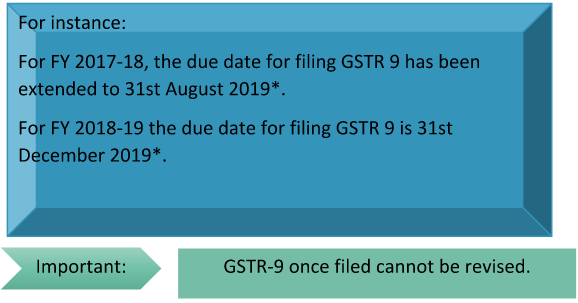 What is the penalty for the late filing of GSTR-9? 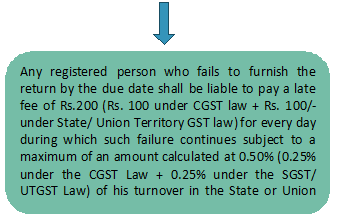 Q. What are the pre-conditions for filing Form GSTR-9?

Ans:  Following are the pre-conditions for filling Form GSTR-9:

Ans: Yes, a registered tax payer can file a Nil Form GSTR-9 only if he satisfied the below mentioned things: 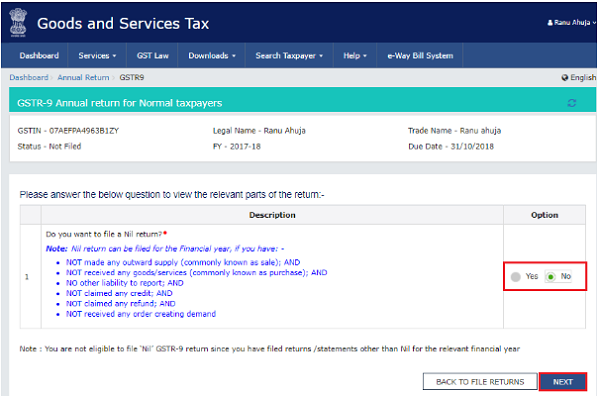 Q. Is there any threshold limit to be checked to file GSTR-9?

Q. Whether a Taxpayer shall be required to file GSTR-9 even though his registration has been cancelled before 31st March 2018 or his application for cancellation was pending as on 31st March 2018?

Ans: It has been clearly mentioned that every registered person has to file annual   return GSTR-9. Thus it means that every person who registered between July 2017 – March 2018, shall be required to file GSTR-9 providing the details for the period during which he was registered.

Q. If a Taxpayer has obtained more than one GST Registration even though he has a single PAN, then whether GSTR-9 is to be filed at Entity level or GSTIN wise?

Ans: If a Taxpayer has obtained multiple GST Registrations whether in one state or more than one state, it shall be treated as a distinct person in respect of each such registration.

Hence, GSTR-9 is required to be filed separately for each such GSTIN.

Q. Turnover for the period April 2017 to June 2017 is required to be reported in the Annual Return?

Ans: No, only the details for the period July 2017 to March 2018 are to be provided in annual return. The turnover pertaining to April 2017 to June 2017 would be required to be reported in the Form GSTR-9C as a part of reconciliation with the financial statement.

Q. What should be the Primary source of data for declaration in annual return?

Ans: Annual Return should be prepared based on books of account making correct disclosure. Any transactions which could not be disclosed earlier or on which no tax could be paid through GSTR-3B up to the due date of March 2019, have been permitted to be disclosed in the Annual Return-Part II.

Differential tax liability arising on account of correct disclosure of turnover to be paid through DRC-03.

Further, the auditor may disclose the fact of.

Ans: Step 1: Login to GST Portal and go to ‘My Applications’ under ‘User Services’. 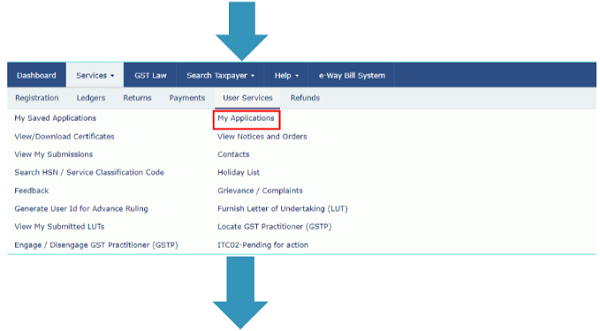 Step 2: Select the Application Type as ‘Intimation of Voluntary Payment – DRC-03’ and then click ‘New Application.

Step 3: Here select “Cause of Payment*” from (a) Voluntary, (b) SCN and (c) Others & Select the appropriate Section & FY. 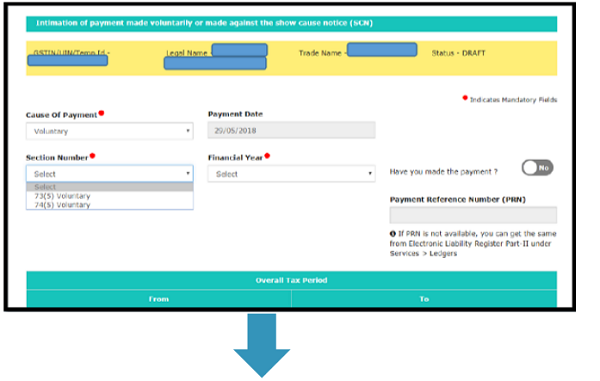 The taxpayer has to enter payment details including the interest, penalty and others.

Step 5: The taxpayer has to click on the ‘Proceed to Pay’ button. The voluntary payment page is displayed. 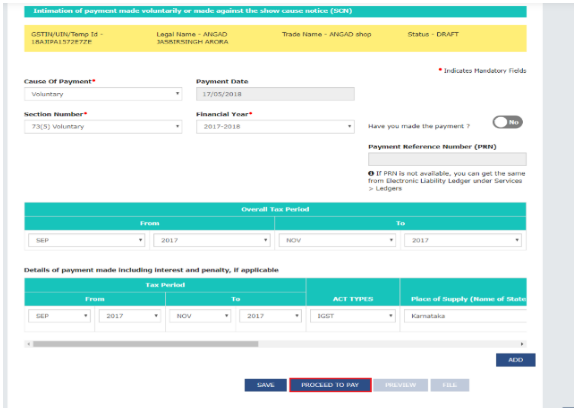 Step 6: Once the amount is entered and paid then select set off button.

Step 7: The taxpayer has to select the ‘Name of the Authorised Signatory and then file the DRC-03 using either DSC or EVC.

Q. What sequence is to be applied for disclosing the value of outward supply in the Form GSTR-9?

Ans: The sequence for arriving the correct disclosure of outward supply is as follows:

Ans: As the invoice has been raised in the FY 2018-19, such supplies would be reported in the Annual Return of 2018-19 not of 2017-18. However, the supplier may be liable to interest for delay in payment of tax on account of delayed raising of invoice.

Q. What treatment has to be made in the Annual Return if taxpayer has made Provision made for unearned income in the books of account at the end of financial year?

Q. Whether credit note issued to registered and unregistered persons needs to be disclosed separately

Ans: A. Credit note issued against B2B supplies needs to be disclosed in Table 4(I)   of Annual Return.

B. Whereas credit note issued to unregistered person i.e. B2C need to be reduced from the supplies and show at net values in table 4(a) of Annual Return. 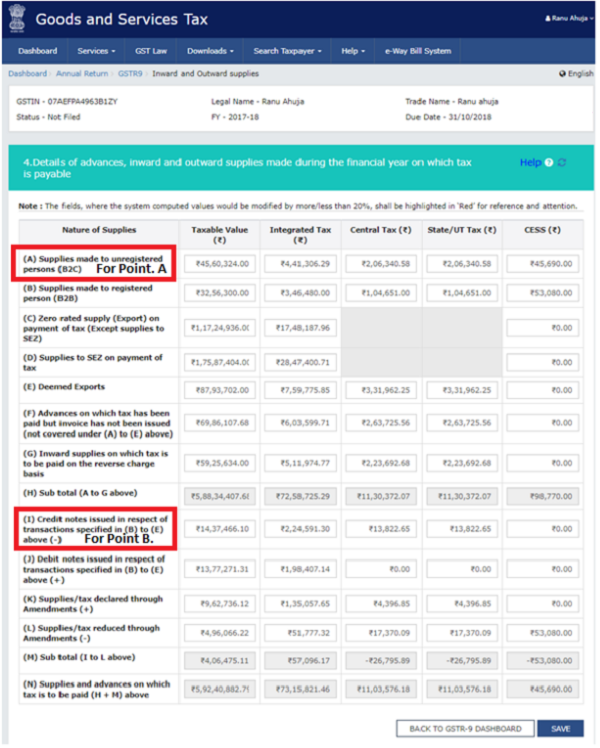 Q. If a supplier has issued a credit note and the same was taken as ITC instead of deducting from the liability in GSTR-3B. How it should be disclosed in GSTR-9?

Ans: The registered person may show correct output tax liability in Part II Table 4 (after deducting CN) and correct ITC (without including CN) in Table 6. The difference arising between the tax payable and tax paid in Table 9 could be explained as extra tax paid claimed as ITC in GSTR-3B with proper note in the GSTR- 9.

Q. What sequence is to be applied for disclosing details of ITC as declared in returns filed during the financial year in the Form GSTR-9? 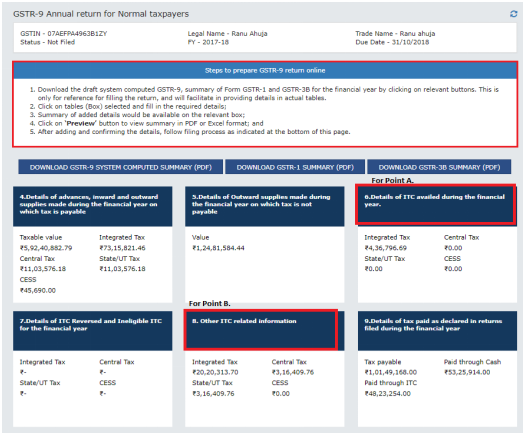 Ans: If the amount is not zero and a tax liability arises, then it has to be discharged through DRC-03 if not rectified in the next financial year.

Q. Input tax credit has been shown in the books of account but not shown in the GSTR-3B. Whether adjustment is required to be made in the Annual Return?

Q. Whether HSN details are mandatory for both inward and outward supplies?

Ans: It will be mandatory to report HSN code at :

However, It will be optional for taxpayers having annual turnover up to Rs.1.50 Cr.

Note: It may be noted that HSN details are required to be declared only for those inward supplies which in value independently account for 10 % or more of the total value of inward supplies.

Q. Whether the value of exempt supply also required to be considered while concluding the value of HSN summary?

Ans: GSTR-2A is a detailed statement of all inward supplies received by the registered persons auto populated based on the details furnished by the counter party. It is important to note that Table 8A of the Annual returns is auto-populated from Form GSTR-2A as on 1stMay, 2019. And there will be difference between the detailed GSTR-2A downloaded from common portal and auto filled number in Table 8A and these could be on account of below:

Unknown purchases- The supplier may have uploaded the invoice with incorrect GSTIN which will be reflected in the GSTR-2A of the taxpayer. This would lead to difference and such difference would have to be shown as ineligible credit in Clause F of Sl. No. 8

There will be some purchases on which credit is ineligible and such difference would have to be shown as ineligible credit in Clause F of Sl. No. 8.

There may be chances the supplier has reported an invoice twice.

Hence, the registered person is required to cross verify the information contained in Table 8A viz a viz GSTR-2A and finally reconcile the ITC based on information auto-populating 8A which is non- editable.

Q. What if a registered person has paid consideration to suppliers and taken credit based on invoice, but the supplier has not uploaded the invoices which is not reflected in the GSTR 2A leading to difference in Clause D of Table 8?

Ans: In such case registered person would not want to forego the credit merely because the supplier has not uploaded the invoices and this would lead to a negative value in Clause D of Sl. No.8.

Value in Clause D of Sl. No.8 is sought to be lapsed. So, there may be positive or negative value in 8D.

Where 8D is positive value, then taxpayer needs to be mindful that that amount is seen as ‘liable to be lapsed’. After suitable opportunity to explain, this amount would need to be lapsed.

And where 8D is negative, taxpayer needs to be equipped with supplier-wise and invoice-wise data as to how conditions of section 16(2) were regarded by taxpayer to be satisfied even though certain amounts are not appeared in GSTR 2A. Hence, it is only reasonable to expect that taxpayer would be allowed opportunity to explain to the department the reasons when 8D is not nil. The copy of invoice (complying with all the conditions stated in Rule 46 of CGST Rules, 2017), the date of payment of consideration to the supplier are the primary documents/ evidences to be safeguarded by the tax payer in a case where value in Clause D of Sl. No. 8 is negative due to failure on the part of the supplier to upload information.